The National Tennis Foundation (NTF) is one of the beneficiaries of the funds raised through Premier Live and their Necker Series that takes place each November.   Since Hurricane Irma and her devastation to the BVI last year, the Vegas chapter of the NTF has had the opportunity to step in and assist incredible student athletes who show amazing promise and huge commitment both on and off the tennis court!  This allows youth tennis players who are dedicated to their game, their family and their studies a chance to relocate to Vegas and continue their training with equally talented NTF participants. 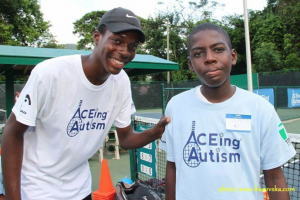 This past week, the Vegas Chapter welcomed Jeron Smith into their program.  Jeron is based out of the Tortola Sports Club and has consistently maintained a #1 junior BVI ranking!  Jeron is truly dedicated on and off the court and volunteers his Saturdays to coaching others and giving back!  Unfortunately, Jeron and his family are one of so very many BVI locals whose lives were forever changed by Hurricane Irma when she wreaked havoc on their town September of last year. Jeron’s family, along with so many others, were left with next to nothing.  As a true nod to Jeron’s character, this did not slow him down as he put his own training aside to step up and assist his community with the rebuilding efforts. In addition and at no charge, he volunteered his tennis coaching skills 6 days a week for 6 weeks to mentor and train other children who were unable to evacuate the island.

We are proud of Jeron and his huge heart and strong commitment to his community, his academics and his talented tennis game.  His story is not alone, and we are grateful for every donation and auction item purchased through Premier Live events.

Last year alone the Necker Series auction raised $1 Million Dollars with most of the money being directed to Virgin Unite for the rebuilding and revitalizing of the BVI which was devastated by recent Hurricanes.

Over the years, the funds raised have allow organizations like the NTF to nurture and encourage student athletes!  Thanks Jeron for showing us what ‘Being Your Passion’ truly is!  We are looking forward to watching this journey unfold for you!

To learn more about Premier Live and events that benefit the NTF, please visit www.premierlive.com 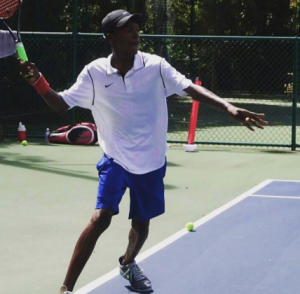 TENNIS HIGHLIGHTS  As a junior tennis player, Jeron has won numerous tournaments, both nationally and regionally, and has maintained a  consistent placement as the No. 1 junior in the BVI. He is the first BVI junior tennis player who holds a BVI passport to  earn an International Tennis Federation (ITF) junior ranking, acquiring five points in his second ITF junior tournament in which he competed. In 2017, Jeron has competed in several ITF Junior tournaments in Jamaica, Trinidad and Tobago,  Barbados, and Guadeloupe.

GIVING BACK  Jeron has also been a key asset for the Tortola Sports Club as a Teacher Assistant in Training on Saturdays with our free  grassroots Kids Tennis Classes (all year round), as well as with our after‐school Little Munchkins Tennis Program (Tuesday through Friday during the school year) under the supervision of the Director of Tennis, Amine Elouazzani. He  also volunteered in the spring of 2016 as a Tennis Coach for a six‐week long pilot tennis program for children with Autism Spectrum Disorder in the BVI which was specially designed by a US nonprofit organization – Aceing Autism. From 2012 through 2016, Jeron was the Ball Boy Co‐Captain for Sir Richard Branson’s Necker Cup Pro‐Am Event  held annually at Necker Island. Every year he assisted with training and mentoring ball boys and ball girls for this prestigious event.

OFF‐COURT EXTRACURRICULAR ACTIVITIES  In addition to his tennis obligations, Jeron has also made time to actively participate in several professional and social  organizations. In tenth grade, he served as a President of a Junior Achievement Company at the Elmore Stout High School from which he graduated in June of 2017.  As the President, he managed to lead the organization into earning profits exceeding one thousand dollars in just a few weeks of operation. He is also a long‐serving member of the Boys’  Brigade, a Christian‐based organization established to instill obedience, reverence, and discipline. For his contributions to the Boy’s Brigade, he has been awarded the prestigious title of Boy Brigadier of the Year, on three separate  occasions.

HURRICANE IRMA AND MARIA  Jeron comes from a very difficult economic background from a very low‐income single‐mom family.  The goal for him from September 2017 to September 2018 was to take a gap year after his June 2017 high school graduation and play as  many ITF Junior and USTA tournaments as possible (if he would receive enough funding) to get ITF Junior ranking as well as UTR ranking in order to be able to apply to colleges in the US with hopes to earn a tennis scholarship.   Unfortunately, hurricane Irma and Maria put a huge obstacle in his plans. Jeron comes from the East End of the Tortola island, where the damages to people’s houses were the most extensive. After the hurricanes, Jeron helped in his  community with rebuilding, and in addition to that, he helped the coaches at the Tortola Sports Club and at Virgin Gorda Tennis Academy with providing six‐days‐a‐week for six weeks with free tennis to the children who stayed on the islands after the hurricane and didn’t evacuate.   Due to the damages of the tennis facilities, he wasn’t able to train properly until November when we were able to secure one month of free training at the Junior Tennis Champions Center at College Park, MD. For him, this was the best month of his life as he was able to train every day with players  better than him (which he doesn’t have in the BVI). Upon his return to BVI in January, Jeron continued to train as best as he could but the limited opportunities for high performance training and lack of competitive matches prevent a proper development. Having the opportunity to train at a successful tennis academy in the US would be the challenge he needs in order to keep improving his game and continuing with his application process to US colleges.